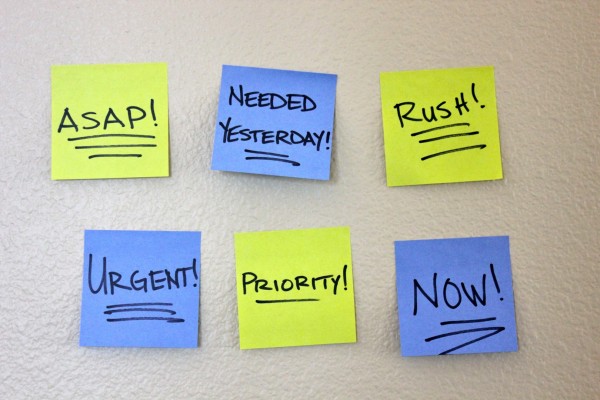 In experiences with three teams lately, I have noticed that something happens to teamwork and the commitment to collaboration when a deadline and related sense of urgency comes into the picture. As someone who thinks a lot about how we create the conditions for groups to perform at their highest collective potential, I have been investigating how urgency can wreak havoc. It is a force to be reckoned with, consciously and carefully.

When a sense of urgency comes in, there is an ensuing pattern in which people “narrow in.” The feeling of being rushed can unconsciously lead people to limit the number of people involved and discount participation and other perspectives.

Recently, I have seen a variation of this dynamic on teams as small as four people. The following story is a hybrid of several situations:

In the push to get something out the door by a deadline, one person on the team took the lead, checking in with one other person she knew well. Instead of copying everyone, emails went to only part of the team, leaving others unaware they were left out. As the deadline approached, decisions were made by fewer people, without checking with others about how the product was evolving.

The work product got “out the door” by the deadline, without the full input of the team, leaving several members upset. Also, the product had shortcomings that the other team members pointed out, too late to impact the design. The people who received the product had a similar reaction to one of our team members – further indicating we could have avoided this misstep if input was incorporated before it was sent.

In each real situation, we were left with:

This all occurred because we had not done our best collective work.

I sensed that the people who were focused on getting the job done were not conscious that they were narrowing both the input sought and the number of people who decide. I understand the impulse: “That will slow us down. Sure, it would be nice to get more input, but we don’t have time for that.” I’ve done it too; I ask for input from those more like me, who are not likely to suggest a lot of changes.

It does not have to be this way. The more I’ve seen how urgency affects things, the more I realize that these moments are when a team needs to be vigilant, recognizing that this is a situation where things can go off the rails. How can we capitalize on the full benefits of teamwork even when things are moving quickly? Read more in Part 2.