One of the most inspiring speeches we heard at the Slow Money National Gathering was from Tom Stearns, President of High Mowing Organic Seeds. His company is based in Hardwick, a small town in northern Vermont, which was featured in The New York Times article entitled “Uniting Around Food to Save an Ailing Town”. Remarkably, over the last three years, the local area has added 150 new jobs to an existing 500 jobs, spread across many small companies, all associated with the local food economy.

One of the key ways this came about was through strong locally-based business networks. Tom described how he and about a doze 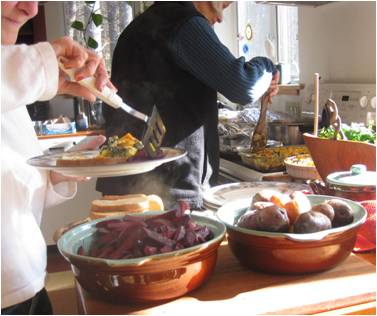 n friends/colleagues who owned farms and farm-based businesses began having regular gatherings. Each month they met at a different business where they shared a potluck dinner, a tour of the operation, and then the host presented a topic for discussion. This was a ‘think tank’ of experienced business people who all are running businesses within two to three miles of each other. They recently had their 50th meeting and he estimated that this group, which has now grown to about 40 people, has spent over 300 hours together sharing challenges, offering advice, learning about each others’ businesses, finding partnerships, and even loaning each other money in hard times.

They have no web site, no non-profit 501c3 status or board of directors, no staff…it’s just people, coming together over a beer and a meal, talking about what they can do individually and collectively. After a few years, so many business owners wanted to join in the potlucks that the original group encouraged them to form a second potluck meeting. The local area has filled almost all the niches in a complete local food system – production, distribution, value added products, and composting of the waste – including organic farms, seed businesses, cheese makers, a natural wood finishing product using the whey from cheese making, and a composting business. The potlucks gave people from many parts of the ‘system’ the opportunity to regularly connect, with some structure (e.g., a topic of conversation each month) and in unstructured informal conversations, which could lead to many new connections.

The simplicity of this model is compelling – provide an easy place for ‘coalitions of the willing’ (i.e., people committed to building thriving sustainable enterprises, based in place) can come together regularly over food and conversation. To build a sustainable economy requires that we create these larger webs of symbiotic businesses, working closely with people and organizations beyond our organization’s boundaries. The potluck element is also important in bringing the added benefit of community and friendship to the work. When we hosted a leadership retreatfor about 15 women working in various contexts to promote sustainable solutions, one of the aspects participants liked the best was the opportunity to sit down to a home-cooked meal and enjoy good conversation. In a time where Facebook, Twitter, webinars, and Skype are proliferating…and social networks are often interpreted to mean solely our on-line connections, this story from Hardwick is a reminder of the power of face-to-face networking opportunities.