In the days after the Hurricane Katrina disaster in New Orleans, there was criticism of those who had stayed behind – “they had warning, why didn’t they leave?” However, it came to light that 50% of the African Americans in the city did not have cars. They did not have the means to leave. The systems for evacuation were not tailored to their differing needs. This story was shared in a workshop I attended this week with Professor john a. powell, which explored the systems and structures that create unequal outcomes by race. powell’s work offers a valuable way to “see” how inequities come to be and funders and social change advocates can work to create systemic change.

When we see these differing outcomes by race, the response often focuses at the level of the individual, e.g., blaming the marginalized group as inadequate as the story above illustrates or blaming individuals for being racist. For example, in media interviews after Katrina, Professor powell was asked if he thought George Bush was racist. He said he would not waste his time trying to figure out what was in Bush’s head. Powell said “when we use the word “racist” the conversation shifts from the structures that create racialized outcomes to the psychological condition of individuals.” It is more productive to focus on the structures that created these differing outcomes.

We all live within structures that provide opportunities, e.g., the opportunity to access education, health care, food, transportation, communications, etc. These structures unevenly distribute benefits and burdens to different gr 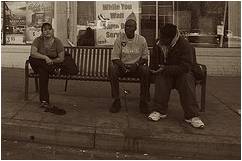 oups. Seen another way, individuals are situated in the systems differently. For example, an African American youth in Roxbury, MA is geographically segregated from educational and job opportunities compared to a wealthier white youth that lives close to downtown and public transportation. In another example, a report by the Dukakis Center found that in Boston, black commuters spend an extra 66 hours a year waiting, riding, and transferring than white bus riders. For more details, see Staying on Track a report by the Dukakis Center as reported in this Boston Globe article.

The Kirwin Institute, which powell previously worked with, has done mapping of opportunities to show how these are allocated by geography. This slide show shares maps of Massachusetts on starting on page 14. In Massachusetts, more than 90% of African-American and Latino households were isolated in “opportunity-deprived areas.” When developing policies/programs and considering investments, it is not enough to promote a universal strategy that does not acknowledge that people are situated differently. A person who is living in an “opportunity-deprived area” will likely have multiple reinforcing constraints that need to be considered. This is the other side of the dynamic or archetype that repeats in many kinds of systems called “success to the successful,” which most of who played Monopoly understand and Donnella Meadows describes in this essay.

powell advocates an approach of “targeted universalism” – create a universal goal, then recognize how groups are situated differently within structures related to the goal, and develop targeted programs or approaches based on these situations. powell has a new book out called Racing to Justice, if you’d like to learn more.