It’s possible to make large events participatory and interactive. Here we share our latest inspiration and approaches, from recent work with events from 50 people to over 200 people. The topics and audiences vary, yet the desire to inspire and connect people, enhance learning, build connections, and advance work beyond the meeting is the same. Here’s what goes into our secret sauce for creating a participatory, inspiring event:

Participation starts in design: Working with adesign team that includes representatives of the people who will be participating in the event helps ensure the event format is relevant and effective. This group can: 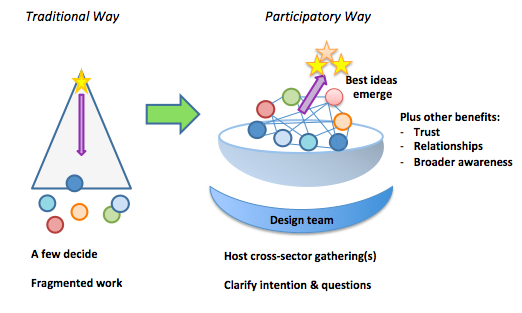 For example, we co-facilitated the annual meeting of the Greater Nashua Public Health Network, with a focus on building a trauma-informed community. The design team helped us get a sense of how much training had been done so we could tailor the content of the training portions. We agreed on a clear set of desired outcomes and went through several rounds of an agenda design, tailoring and improving it each time, based on their feedback.

At the event, start with stories: Getting people sharing stories early in the day builds relationships and creates a warm, welcoming environment. Our approach is inspired by an exercise called Radical Acceptance, which I learned from taking improv classes with Boynton Improv Education in Portsmouth, NH. This simple exercise builds a sense of emotional safety and encouragement for everyone to speak up. I modified it slightly by doing the following:

This only takes 10-15 minutes. Sometimes people pick up on the “yes!” and bring that positive response into other parts of the day, often with a shared laugh.

Offer inspiration/new ideas and new voices:  Beyond the standard keynote presentations and skill-building workshops, consider having shorter TED-talk type or PechaKucha esentations (presenter has about 7 minutes to talk with 20 image slides) and featuring voices beyond “experts,” e.g., youth, those with lived experience, people from marginalized identities or communities.

Host cross-pollinating small group conversations: The World Café process taps the ideas of everyone in the room and allows people to make new connections and learn from each other. At an anti-racism gathering of 200+ people from Maine, New Hampshire, and Vermont, we invited people to talk in a group of four with people from their state about what is working in anti-racism work. In the second round, they mixed to a new group of four with people from other states, sharing themes from the previous conversation, and then talking about what more was needed. With 200 people, this meant we had 50 four-person conversations each round (100 total), which is a lot of learning and information exchange…and fertile ground for new relationships and collaborations to form.

Allow space for self-organized deeper dive conversations: All of the conversations and ideas percolating through the first part of an event can be given a space to land and deepen if you design space for that. Inspired by the process of Open Space, here’s an example of how we organized this at the event with 200 people:

At another event, we had time for people to rotate to a second topic table, while some people stayed at the first one, building in another layer of connection and cross-pollinating.

The range of topics that were suggested were far beyond what our design team would have thought of, and we learned which areas had the most interest. People had the freedom to initiate or join conversations and connect with others with similar ideas, concerns, and questions.

I wish I could somehow visualize and learn all the seeds that got planted at these events. We offered the fertile ground – so time will tell what grows!