One of the books on my summer reading list is Rebecca Solnit’s Hope in the Dark: Untold Histories, Wild Possibilities. She explores what it means to sustain hope amidst difficult times. Many of her themes are around how our minds and cultural ways of thinking and sharing information can constrain our sense of what is

possible. She maps out grounds for hope in multiple areas, by sharing stories of activism and social change and challenging our assumptions about the cause-and-effect of what leads to societal change.

One place of grounds for hope is in how we recollect the past. She writes:

“Amnesia leads to despair in many ways. The status quo would like you to believe it is immutable, inevitable, and invulnerable, and lack of memory of a dynamically changing world reinforces this view. In other words, when you don’t know how much things have changed, you don’t see that they are changing or that they can change.”

I find this true particularly related to how we tell stories of collective change. There is a dominant narrative, widespread in the media, that government is wasteful and ineffective. It is rare to read headlines or stories that highlight well-functioning policies or describe the process of a change that developed these and has worked. One notable exception is the Fixes column in the New York Times that highlights programs that are working. Solnit emphasizes how narratives of change can dismiss or overlook the impact of social movements.

In working on with collaborative change initiatives, it is worth asking how change has happened in that place in the past. What are stories and examples of where the community created positive changes? In considering these, it is important to access multiple perspectives to uncover and challenge our assumptions of how things change. Solnit writes that we need “a memory commensurate to the complexity of the past and the whole cast of participants, a memory that includes our power, produces that forward-directed energy called hope.” Appreciative Inquiry is a method that offers questions for this kind of exploration.

A couple years ago, the New England Grassroots Fund put on a public event to highlight a remarkable story of grassroots activism in seacoast New Hampshire from several decades ago. In 1973, the wealthy mogul, Aristotle Onassis, initiated a plan to site a 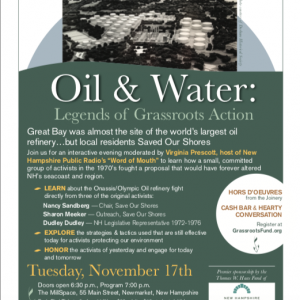 massive oil refinery, in the neighborhoods and forested land near the Great Bay Estuary in Durham. It is hard to imagine now, but the vision was to build a facility that would process 400,000 barrels a day. It had support of the state government. Four local women organized a grassroots movement that eventually defeated the proposal, a story now featured in a documentary called Oil and Water.  The Grassroots Fund event had a panel discussion with the women, recounting how they did it, and then featured current grassroots activists working on similar challenges today.

Another example of reflecting on historial context is a regional plan by the Regional Plan Association, which focuses on improving the New York metropolitan region’s economic health, environmental sustainability and quality of life. Relating to Solnit’s point about remembering how much things have changed, I appreciated how they put this plan in context (on page 22) by describing how the three previous plans had  shaped the tri-state region, for example: RPA’s first plan in 1929 “provided the blueprint for the transportation and open space networks we take for granted today.”The Second Regional Plan in 1968 “envisioned a regional network of economic centers connected by robust and federally funded mass transit.” The third plan was in 1996 and with each specific details of the plan and what came to be were shared, reminding us of how the current region was shaped by decisions of the past.

Harvesting and understanding the stories of what has worked before can provide inspiration and ideas to our current work. It also can remind us of our collective efficacy.

2 thoughts on “Renewing Our Collective Memory of How Things Change”