We are pleased to share this guest blog post by Peggy Holman, which originally appeared as a guest blog on Jesse Lyn Stoner’s blog.

Like a great wave, cultural stories carry us along, creating a coherent view of our world. For example, the phrase the “American Dream” evokes a story that has inspired generations to believe that no matter who they are, by working hard, they have the opportunity to succeed.

When such a narrative peaks and starts to decline, no longer living up to its promise, a new wave of possibilities begins to churn. Small, even invisible at first, some stories catch on and a new narrative wave forms as the old one dissipates.

As a new story grows strong enough to compete with the old story, some of us feel confused, betrayed, depressed, or lost. Others are elated and inspired.  You may find your own or others’ actions disconcerting, frustrating, mysterious, or just plain nutty.

In a time of competing narratives, Berkana Institute’s Two Loops Theory of Change makes visible five roles that naturally emerge. The better you understand these roles, the better you can: 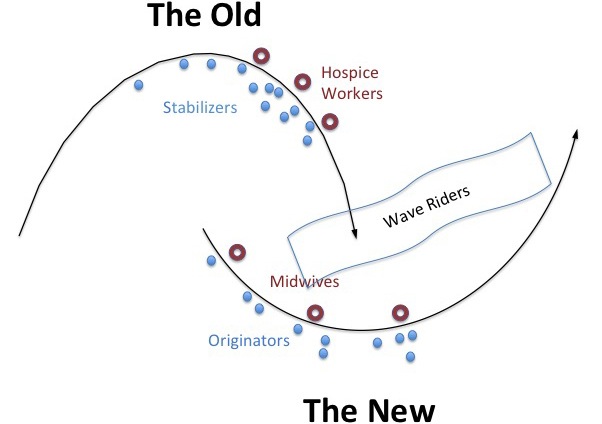